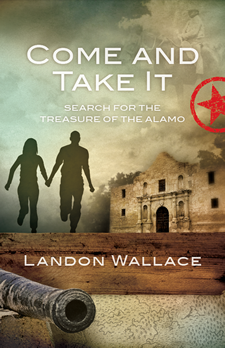 Search for the Treasure of the Alamo

The hunt is on for the legendary treasure of the Alamo in this debut historical mystery.

In the early morning of March 6, 1836, the Mexican army storms the Alamo and kills every one of the defenders except William Barret Travis’s young black slave named Joe. Although General Santa Anna vows to keep him alive, a fearful Joe escapes away in the night carrying a prize far more valuable than anything inside the creaky Spanish mission.

Fast forward to September 2013. Joe’s modern descendant, a 93-year-old World War II veteran living alone in Brewton, Alabama is dying after being attacked by intruders. With his last breath, the old man defiantly shouts, “Come and take it!” And with his demise, the last living person who knows about Joe’s prize is gone forever. While investigating the old man’s death, grandson Nat uncovers clues about a long-hidden secret dating back to the Alamo. With the help of a beautiful history professor named Renee, Nat begins to unravel the mystery of his grandfather’s murder, and in the process discovers another mystery of far greater scale—the long lost treasure of the Alamo.

“A brisk, warmhearted adventure that takes readers on an exciting journey through American history.”
— Kirkus Review